I appreciate the positive feedback I have received regarding the proposed book cover art for my newest book: Quest, The Road to Fallsbad (working title).

Unless I get a flash of inspiration, I will stick with the final version of the cover. It seems to be the one most people were interested in.

Thanks again for the good input. And, for those of you who do not know which cover I decided on, this is it. 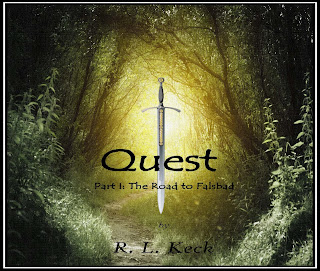 Posted by Unknown at 9:07 AM No comments:

After showing the initial draft for the book cover to my wife, she made a suggestion that was uncharacteristically imaginative: "Use a sword to replace the 'T'."

I agreed. Then, after some manipulation, I ended with this. What do you think? 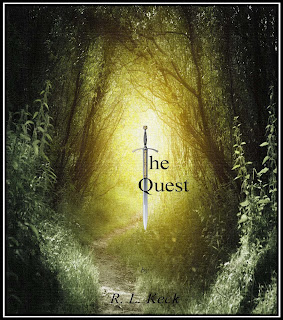 Posted by Unknown at 4:52 AM No comments:

They say you can't judge a book by its cover. That may be true, but it certainly helps to have a cover. The Quest, my latest novel project, now has draft cover art. Here it is. Tell me what you think. 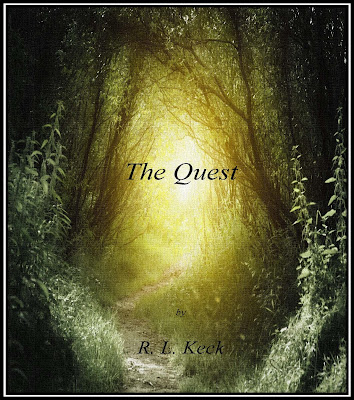 Posted by Unknown at 5:52 PM No comments:

Well, I have been busy revamping my tired, old website with a fresh look and some new information. If you are of a mind to check it out, do so at: www.rlkeck.com and let me know what you think.

I have posted excerpts from my published works, as well as some short stories and the first chapter from my latest project: The Quest.

Anyway, the website, much like this blog, is a work in progress and subject to change without notice. There is one thing I would like to know from you, my faithful reader: if I published my works in e-book format (Kindle or Nook), would you be interested in the download?

Let me know. If the demand is big enough...
Posted by Unknown at 5:10 PM No comments:

"The Quest" is in Editor mode

The sixth draft of my latest novel: The Quest, is with my editor undergoing close scrutiny to ensure it is in the best possible shape for submission to a publisher.

Quest is the story of Torval, an insecure, dissatisfied Norse youth of sixteen who dreams of living the Viking life, just as his father, brother, and uncle. However, it is not to be. When Torval accidentally wakes an age-old magic, he must accept the responsiblity for returning a lost relic to Asgard, from where it came.

Together with his younger cousin, Asta, Torval, with several others he meets and befriends along the way, must not only brave the hazards encountered during their travels across a forbidding landscape, but they must also stay one step ahead of Malik, a demon of Outworld, who has perceived the magic and would have it for his own.

Shouldered with such a responsibility, Torval must learn to control the magic he has awakened, while building his own self-confidence, if he is to succeed in delivering the magical relic to the Rainbow Bridge.

Fortunately, he is not alone. Of those who are accompanying him on this quest is his cousin, Asta: an emerging shape-shifter and one gifted with the 'mind-speech' - the ability to talk with animals; also, Noglom, a woodland troll who, when he is not negotiating trade agreements for his tribe, is ready to fight at the drop-of-a-hat, his battleaxe hungry for blood. Then there is the young asian warrior, Haruka: a dishonored protector of her father, who was assassinated on her watch. She follows the band of travelers in the hopes that she can cleanse her tainted reputation and perhaps die with honor. Lastly there is Alec: a farm boy from a distant land who has been given an enchanted sword and the power of understanding by forces unknown.

Together, these five warriors, must evade the forces of evil that pursue them, until they are prepared to stand and fight. They intend to drive the demon out from their land, or die in the attempt.

Hopefully, this novel will be good enough to interest a publisher. Local reviews are positive.
Posted by Unknown at 10:24 AM No comments: